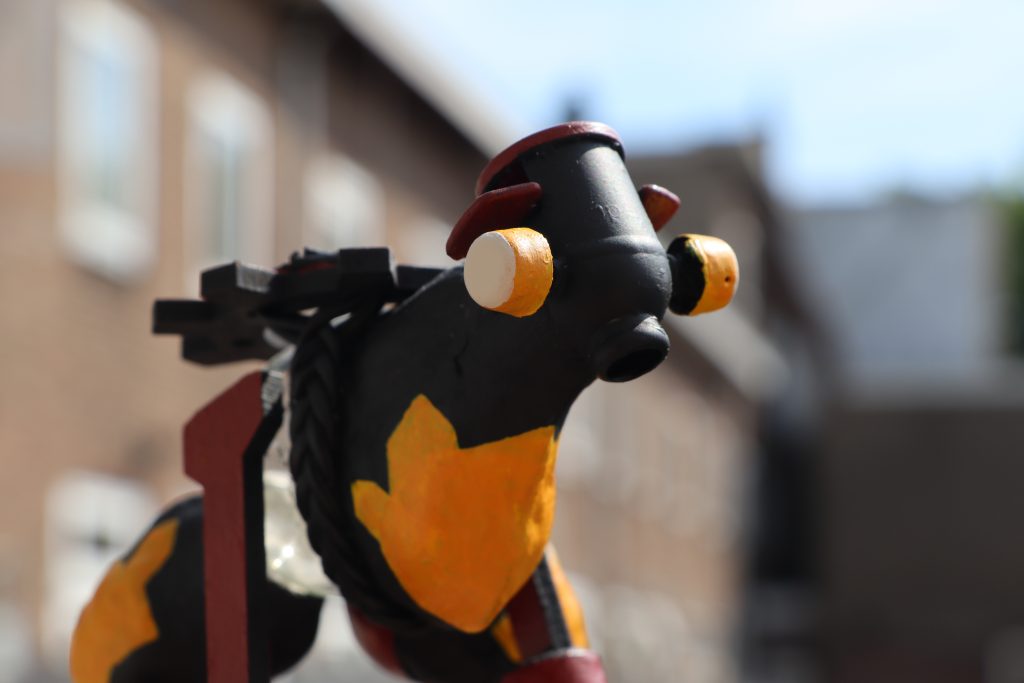 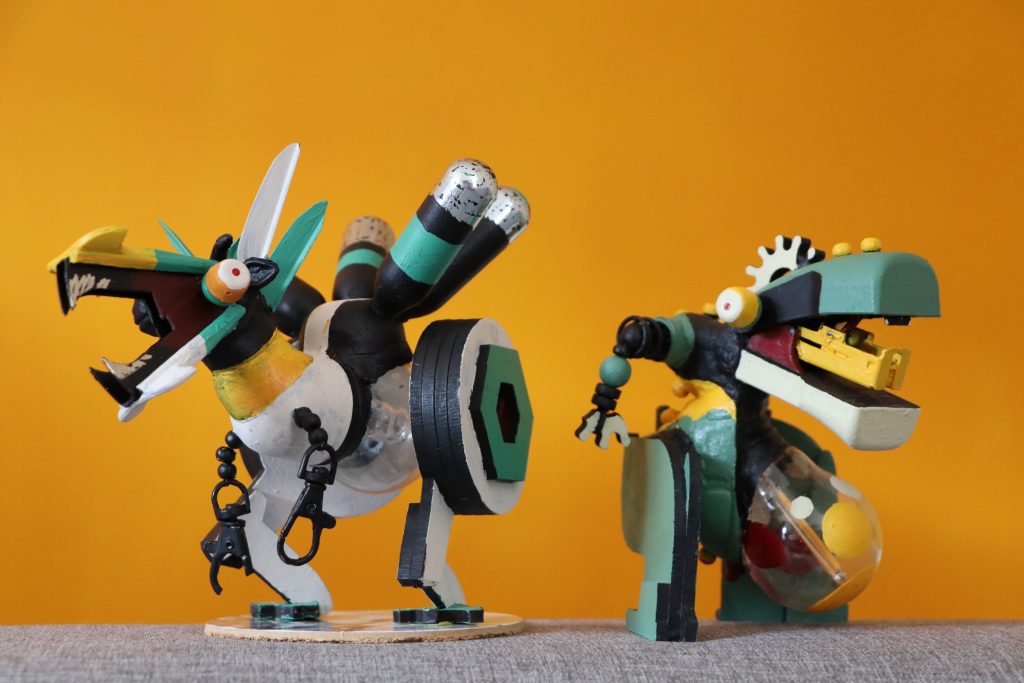 These creatures are all made up of my imagination. I created a little universe around these characters. At the very end, you will actually find a character that is supposed to represent me and my imagination! So start with “Niet” and you will discover a neat little story 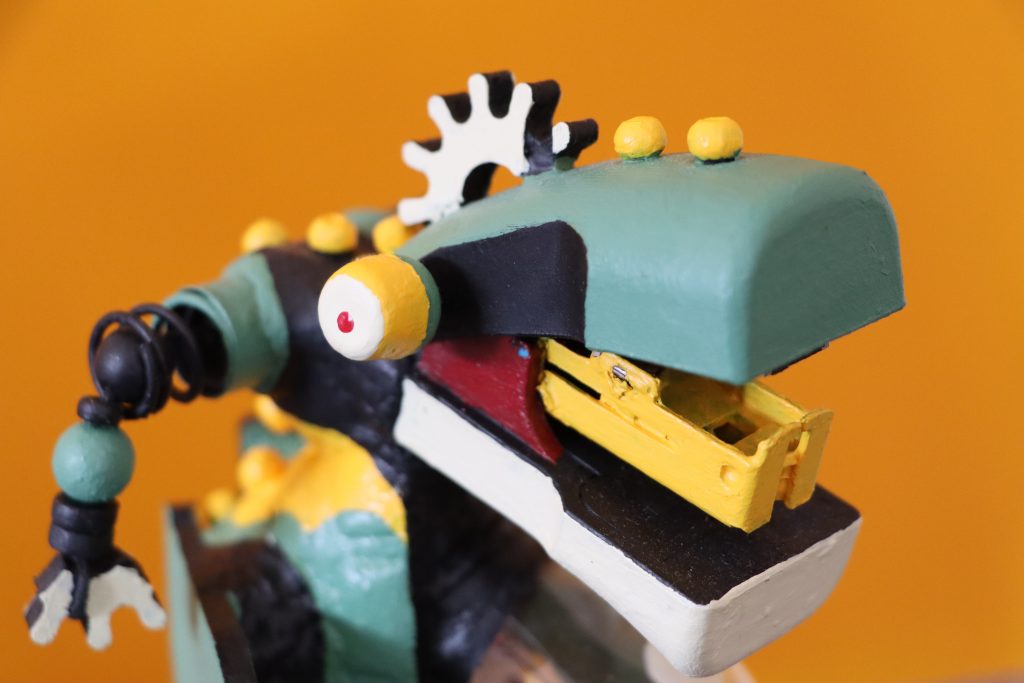 This is “Niet” his names stems from his head being made up from a stapler or “nietmachine” in dutch.

Biography:
Niet is a very naive creature taking orders from NietNiet who bosses him around. His body exists out of mechanical parts which might explain his origin. Niet doesn’t remember how he came to be. but he was part of a big explosion when a spaceship crashed into a planet. Lots of alien creatures and technology died that day. But some have survived… or maybe were even created in that explosion. Niet exists out of either some weird magic or smart technology but Niet is way to dumb to care. Besides, he has got NietNiet’s orders to worry about. This is basically what keeps him busy all-day 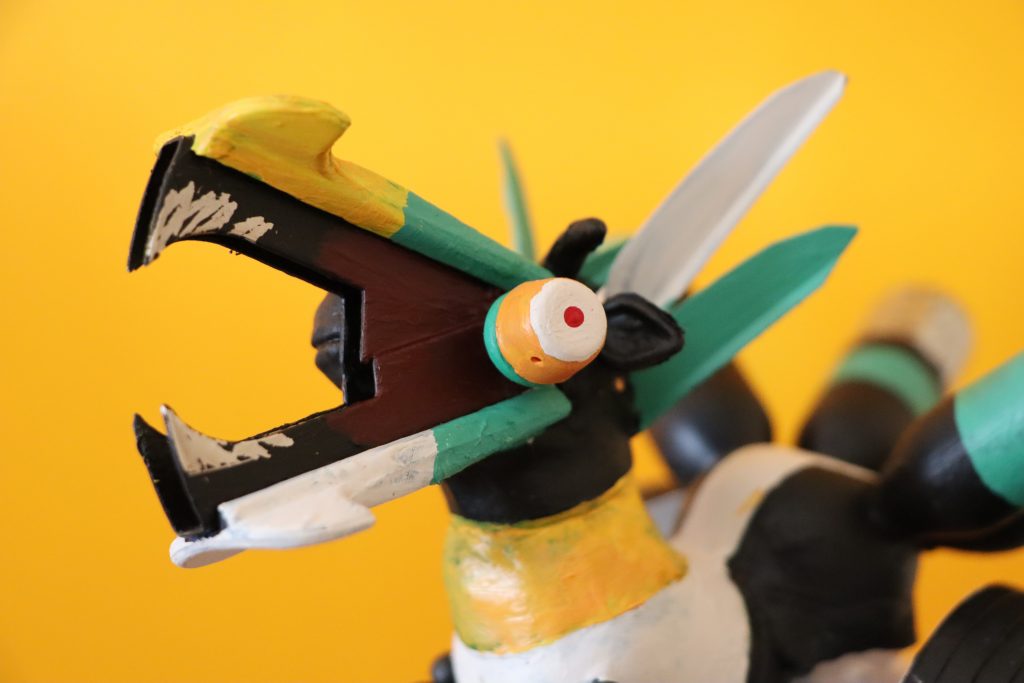 This slightly bigger friend of Niet is called “Nietniet” this translates to no staple or an anti stapler which is exactly what his head is made of.

Biography:
NietNiets appearance is a dead giveaway of him being created out of the explosion. Half his face is some sort of cow from the earth. Was this spaceship full of alien creatures? What is keeping him alive? What is inside the tubes that stick out of his body? All these questions keep NietNiet busy, they frustrate him so much he is filled with anger. Which is why he thinks he gets to boss Niet around. They are still a great duo because they are in this misery together which makes them share a unique bond. It’s just that NietNiet doesn’t respect Niet very much 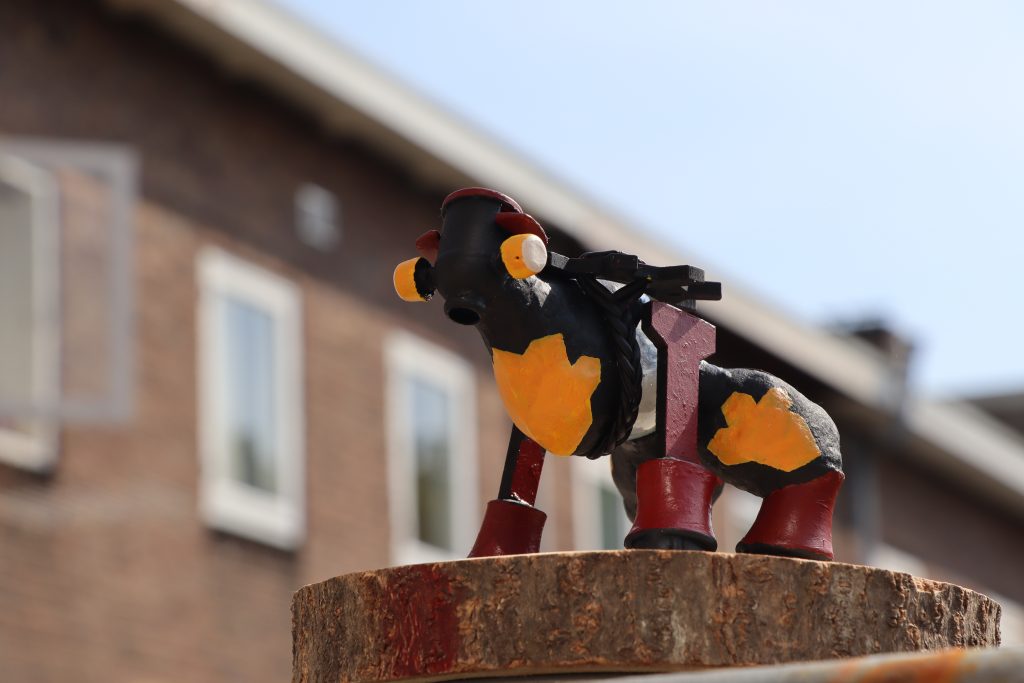 Eok is a holy creature. He gets his name from him being a cow which translates to Koe in dutch. But koe doesn’t sound very holy at all… so it’s flipped!. What it stands for however is very accurate to this creature’s nature. It is a very humble provider

Biography:
Eok is a holy cow, praised by the villagers in his town. Every day, he walks up and down the same mountain. The villagers started mouthing resources on his back and Eok seemed happy to help his local people out. This however was a long time ago. Eok is the only one that knows the true story of what happened to Voggel’s planet and the war. He was taken on a spaceship and served years as a slave. He doesn’t speak but now lives out his days doing what he loves. Helping out a humble creature called Voggel. 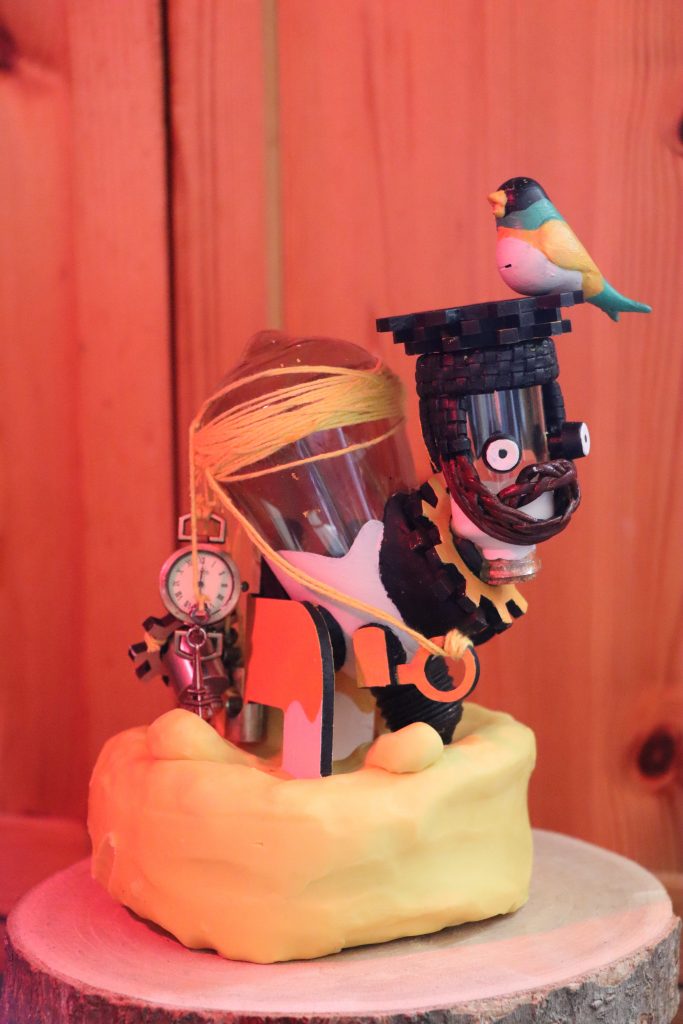 Stranded on an abandoned part of a spaceship “Voggel” walks around collecting anything he finds interesting. He is named probably because he ha this bird nest upon his head. Bird translates to vogel in dutch.

Biography:
Voggel is basically just a very simple being. He collects stuff he likes and lives his day. Evolution has taught him to build shelter and eat food but he never really had to struggle for much so he is very dumb. He is separated from his species by a big event and now has to survive on his own which brings a lot of challenges. Voggel actually doesn’t really see any danger in anything so him still being alive involves a bit of luck. Voggel did however build a very big ladder all the way up to a part of his planet of which he got separated. He builds his house on this top half and met Eok. He just sees him as a cow. The drawings on his legs suggest however that this cow must have been praised as a god once. Maybe before he was taken from his home planet?

Voggels planet for some reason is not made up of a light bulb. But instead, it orbits around one which will represent the sun in my little universe

History:
Voggels planet is really just that, voggels planet. His species is quite dumb and was just living a very easy lifestyle with no natural predators. THEN A SCPACEBATTLE ACURED. None of Voggels race were involved. 2 other advanced alien species were fighting it out in space in an epic battle. Voggels bystander planet was just a casualty in this war. A part of a big spaceship split his planet in half leaving him trapped wondering around the spaceship. Voggel recently build a ladder to the upper half of his old planet with bits and pieces of the spaceship. This is where he builds his house 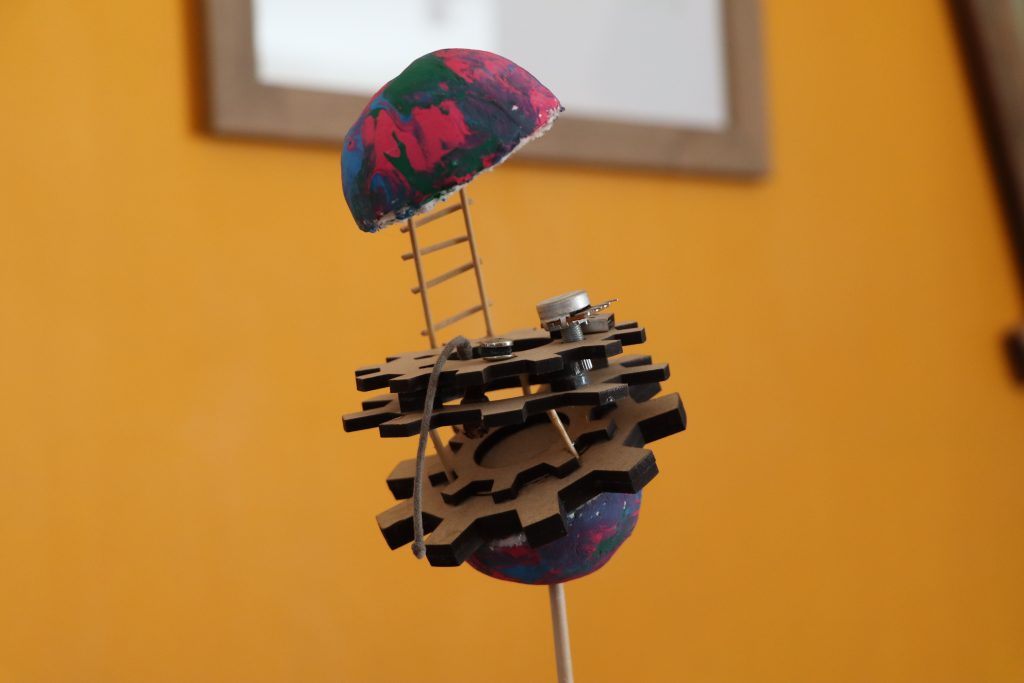 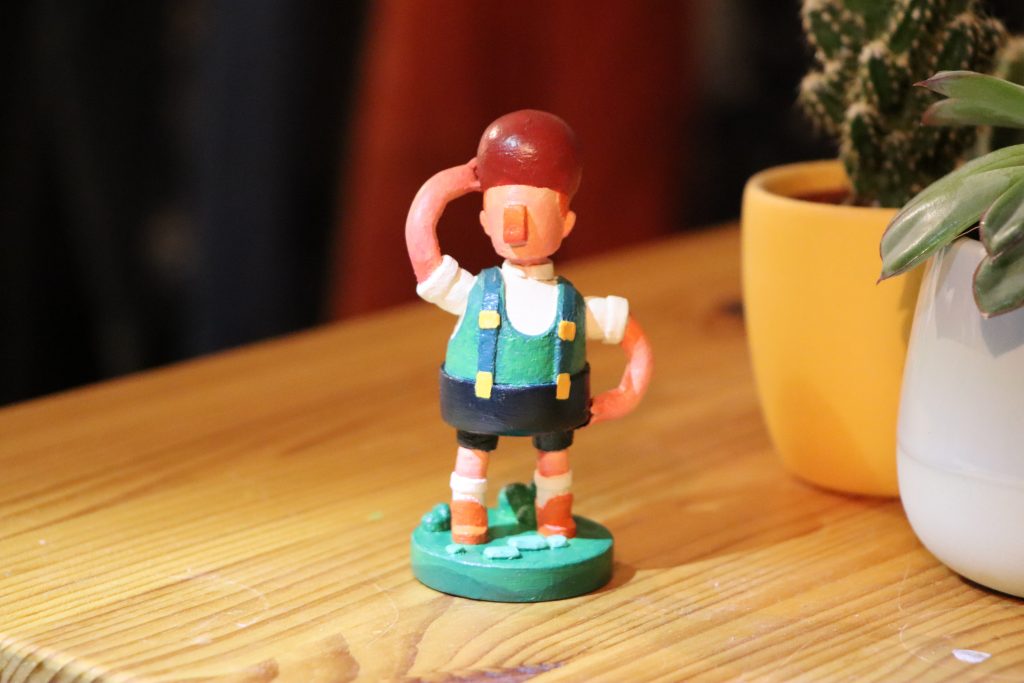 Austin is a regular human. The main character if you will in my universe. I tried making him out of kit bashing objects at first but I really wanted him to be smaller than his supporting characters (all above) so although a lot of inspiration came from physical shapes I ended up 3d printing his parts

Biography:
Austin always fights with his sister. He goes into his imaginary universe to escape his real-life drama. This is where he dreams of these characters. And lives his story’s. In real life he is quite the nerd. Practical, energetic when not bored, has an android and you can often hear him shout “Get out of my room! I’m playing on my Gameboy ”. His adventures mostly involve him hanging out with the hermit because he is a good listener (he doesn’t understand anything Austin says but just can’t speak back in the same language). After a while, Austin usually seeks out a rivalry with Niet and NietNiet who are always up to no good. 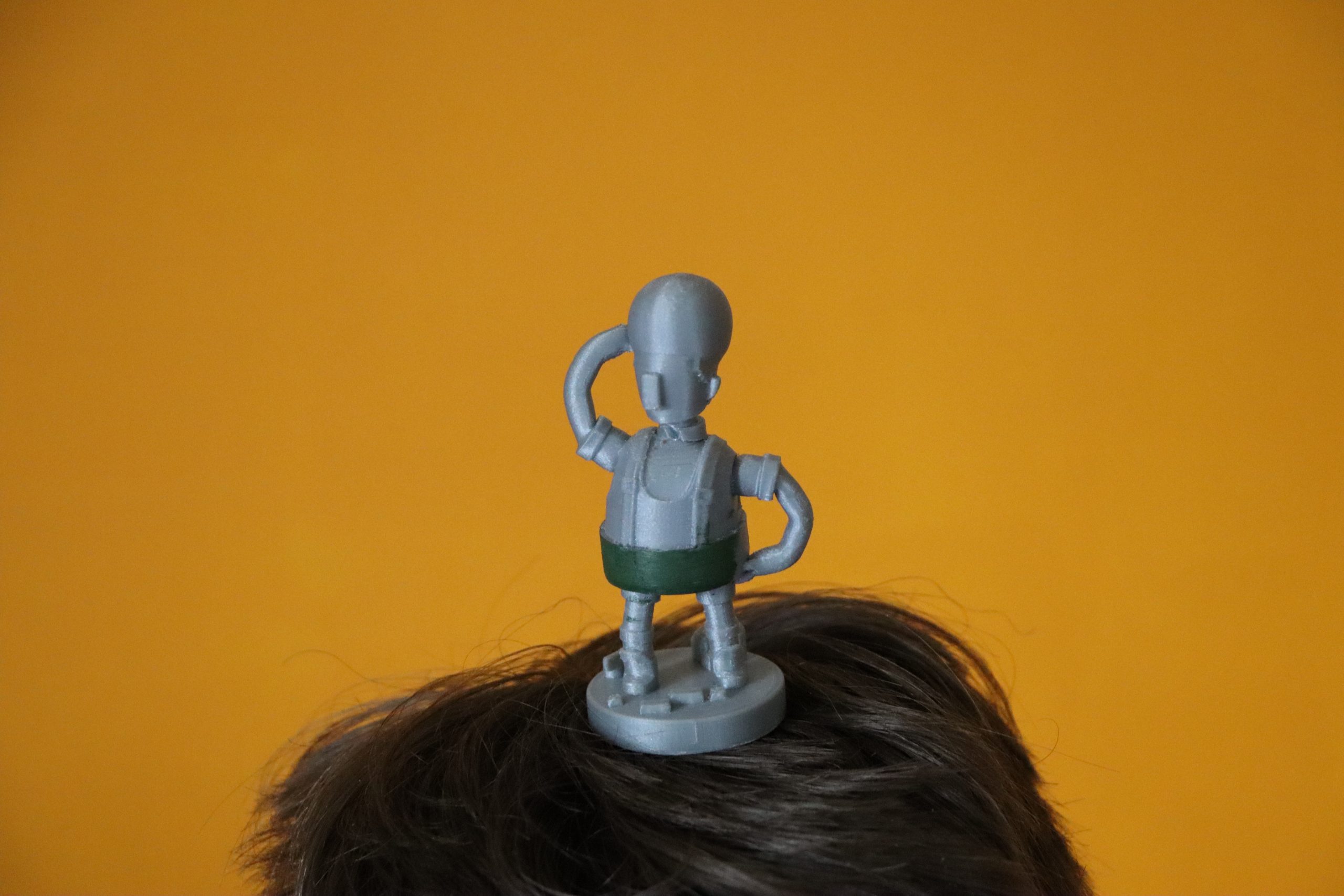 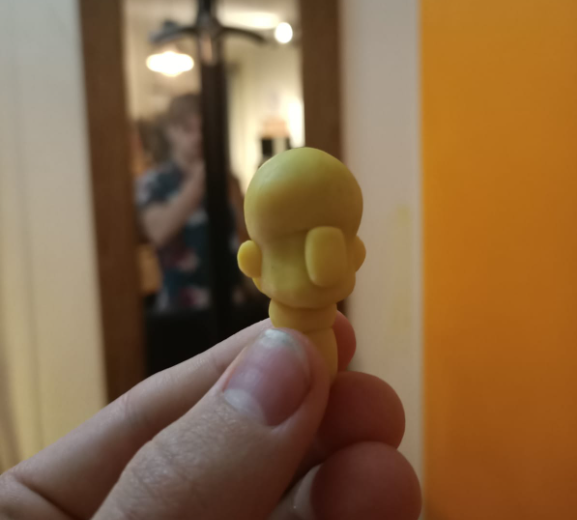 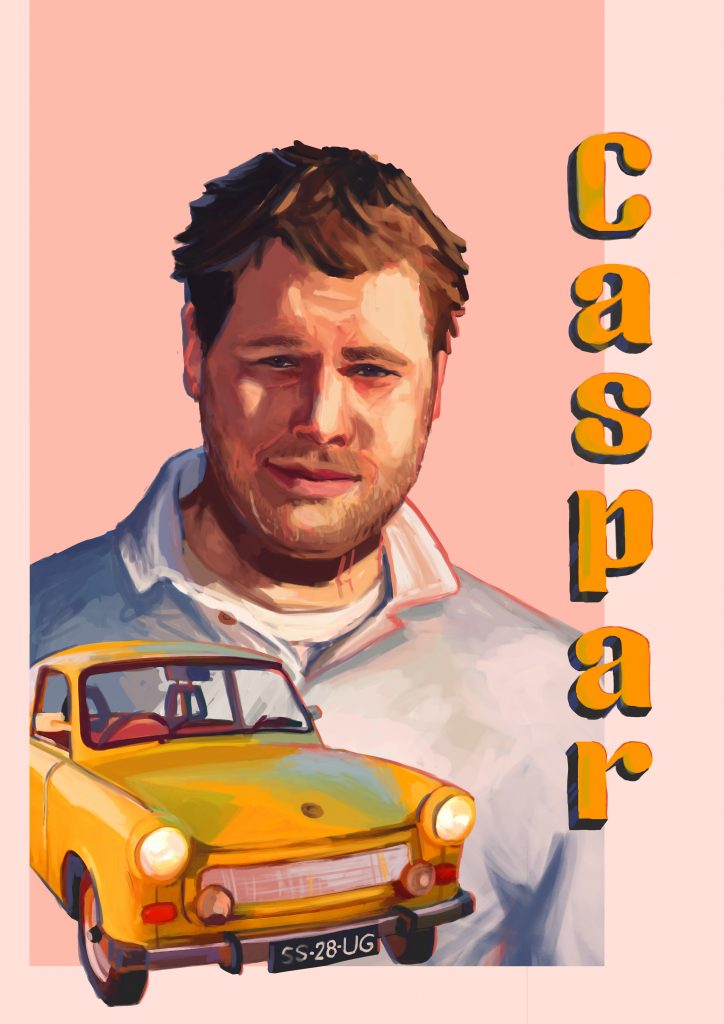 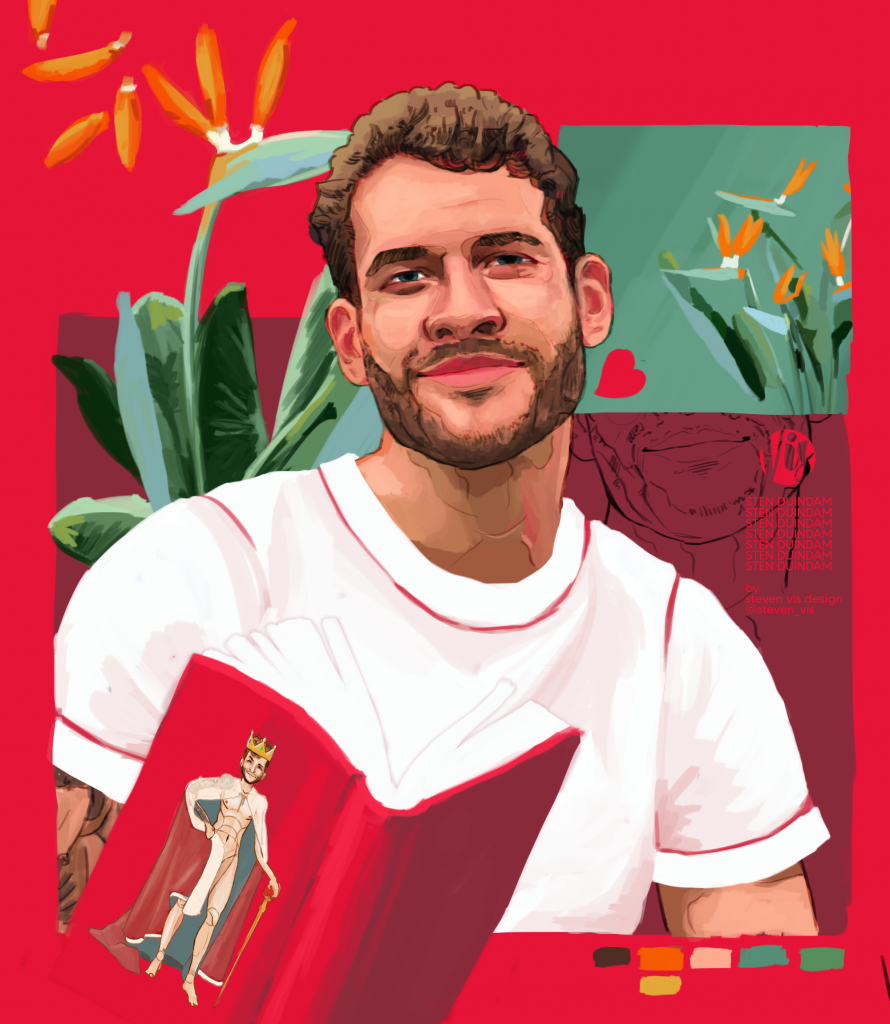 Next to my most popular family, the one from Push your Family I also am part of my own. Meet my mom Dineke, my dad Onno, my brother Peter, his girlfriend Denise, my sister Eline and her boyfriend Caspar. They’re very important to me and I wanted to give them a spot on my site. 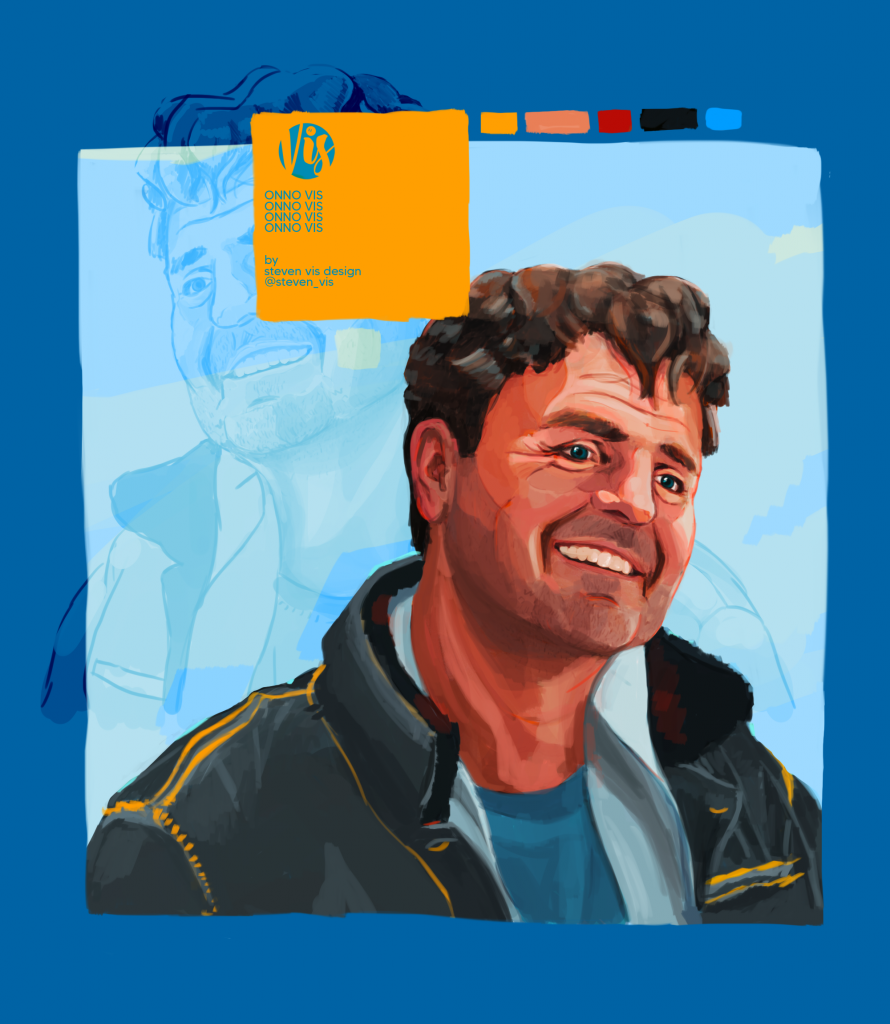 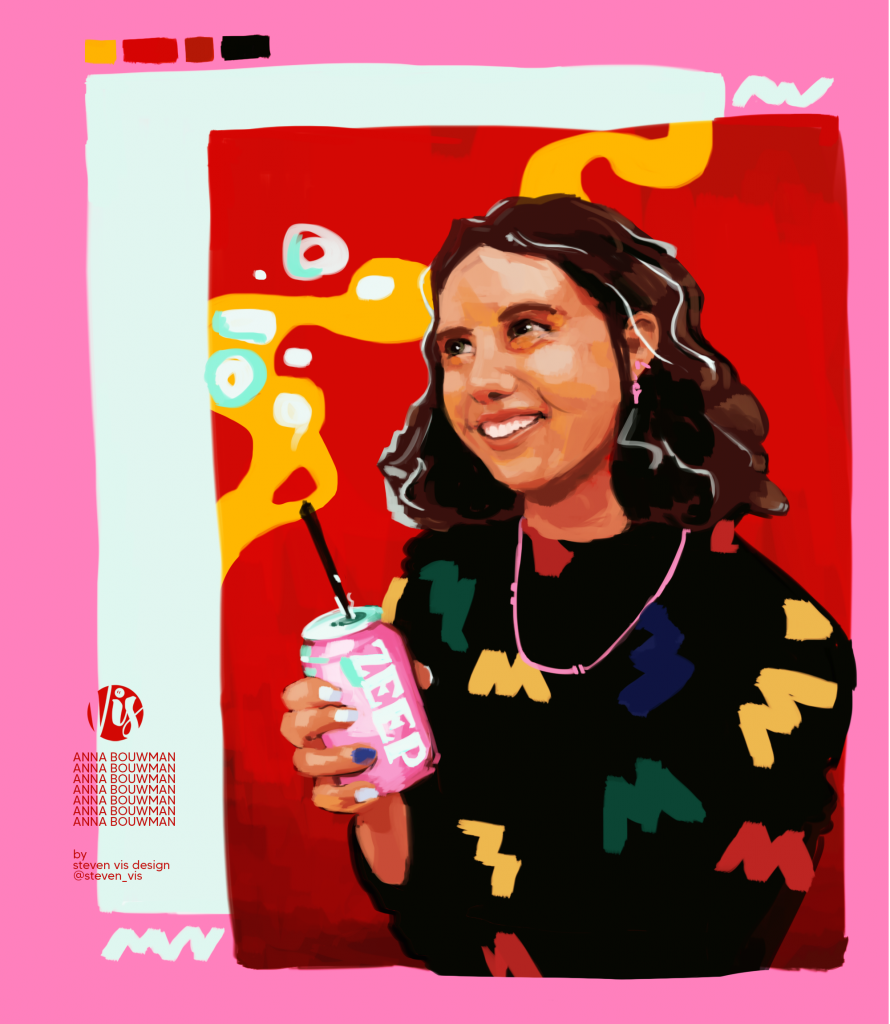 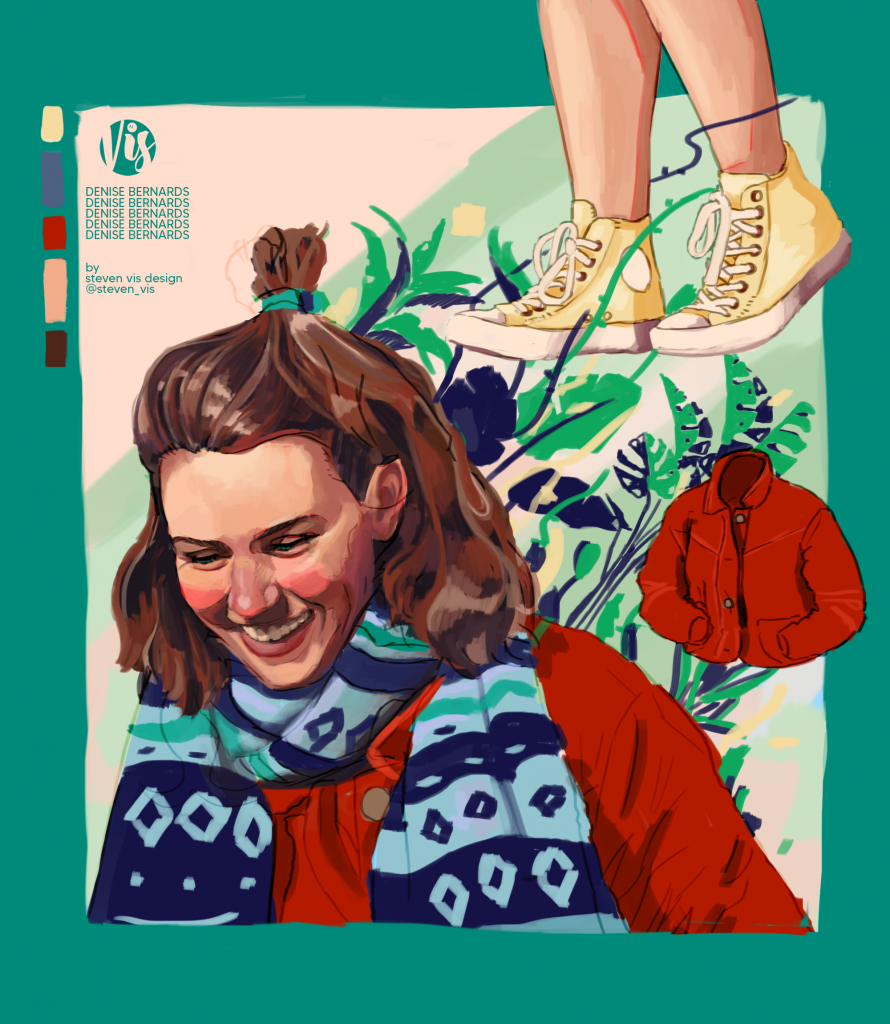 A Character that i made for the unity store.
It excists of a rigged model and it’s own unuiqe aniamtions and guns. 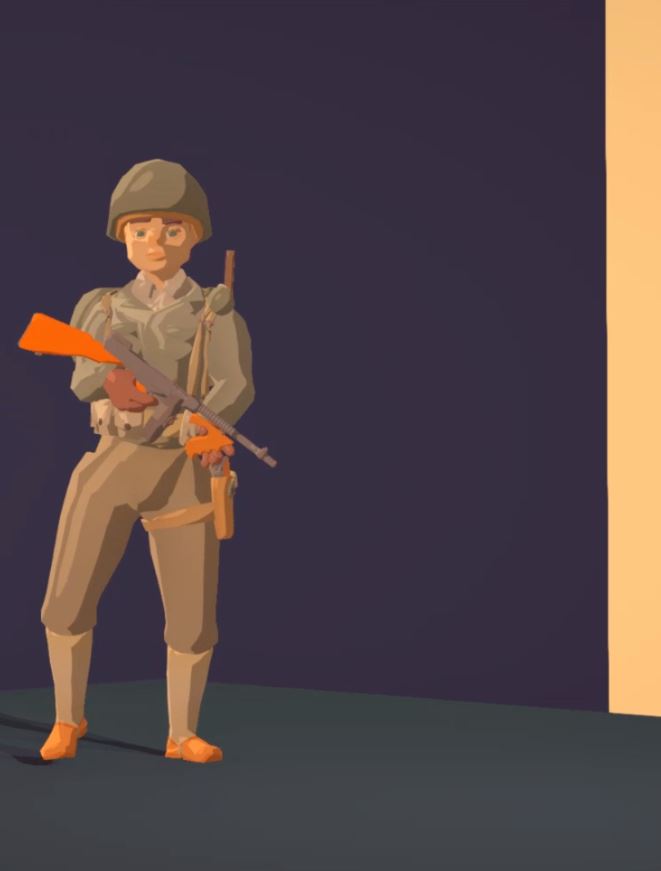 This soldier lives in the second world war. This is often a battlefield full of explosions and screams left and right. This is a time before internet was a part of our daily lives so informations about the war was limited wich coused the boy to have a bad representation of what the war was really like. This is where jong soldiers form towns and cities in europa come to fight in an endless muddy wasteland. They dont know what their future might bring except that it will be no fairy tail. instead they will fight unspottable enemies and boms exploding left and right.

Every year i go to Albania with a group of around 25 people to do some good in the world. we help poor families and entertain the desabled. to raise money for this trip i helped with some art for atvertising

some work i did this year 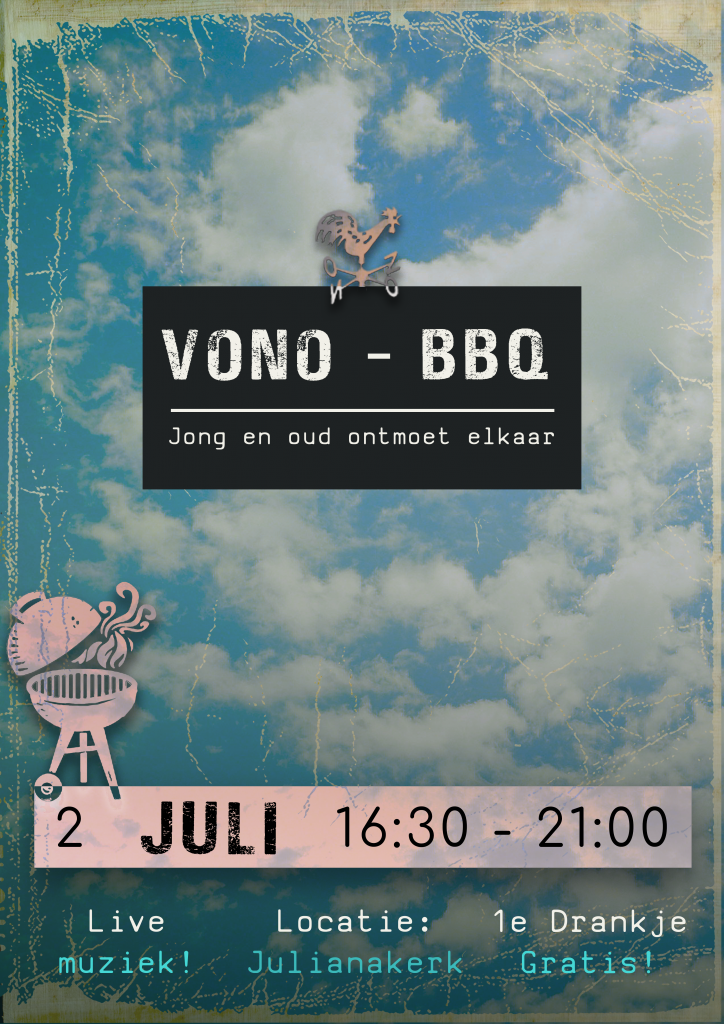 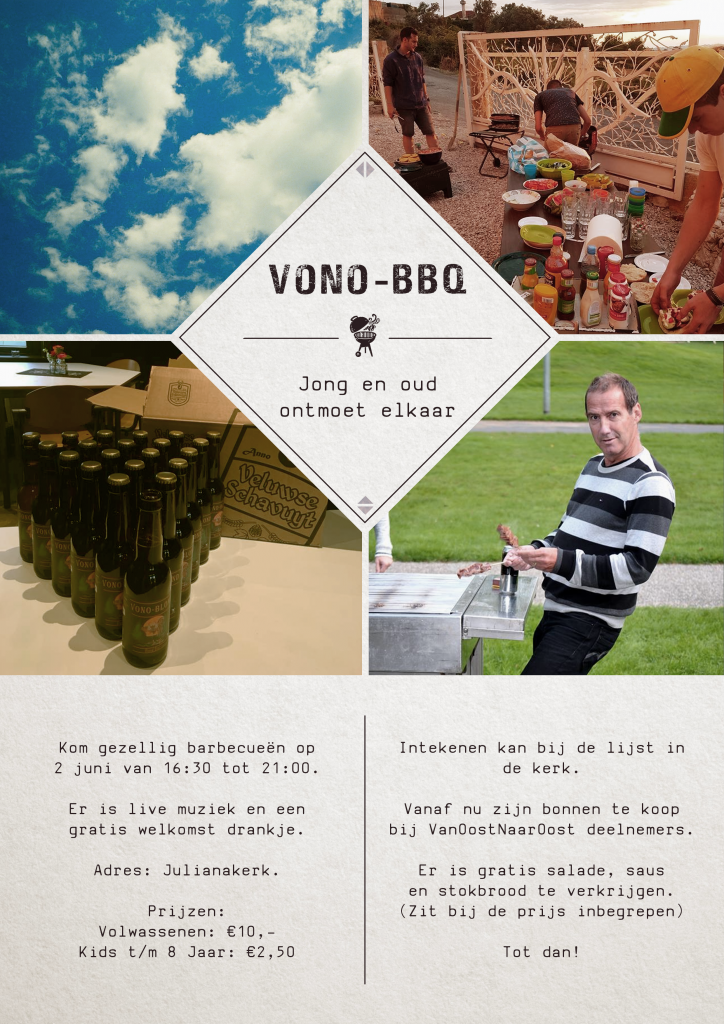 An Arduino Simon says game and an arduino lemonade machine! 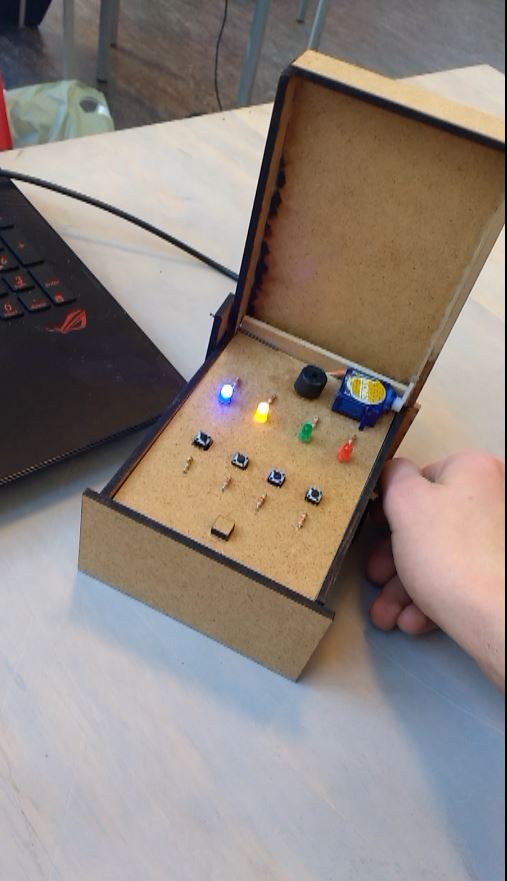 An Arduino Simon says game and an arduino lemonade machine!

This girl that is actually an alien lives in her house at her home planet. her home isn’t futuristic but instead
very basic, cozy, comfy and inspired by the human culture. This planet is not civilized at all. Alien monsters roam this world killing each other for everything. 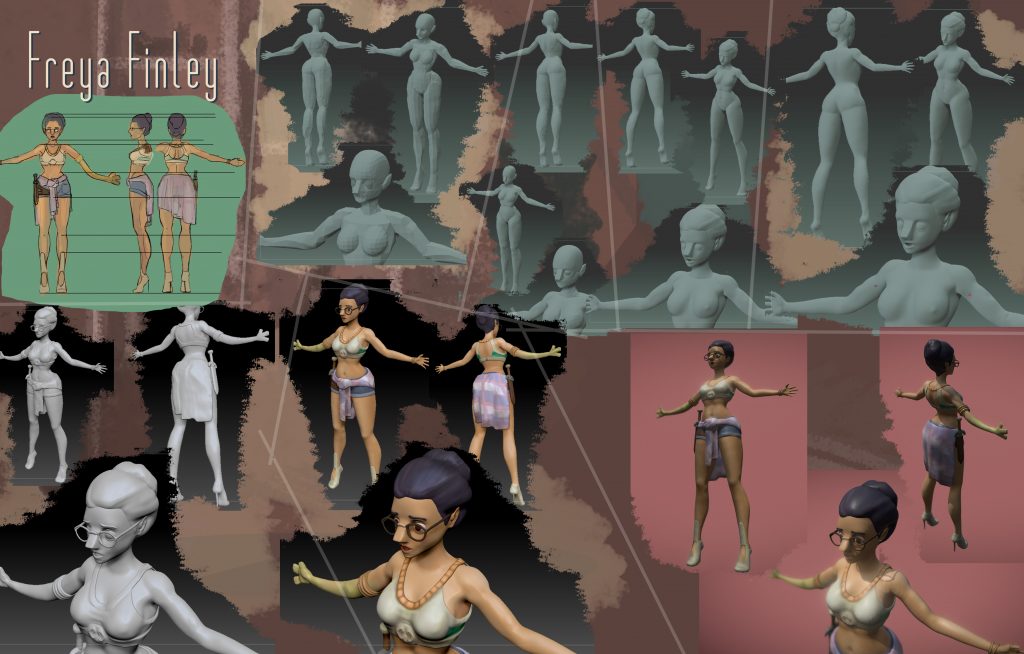 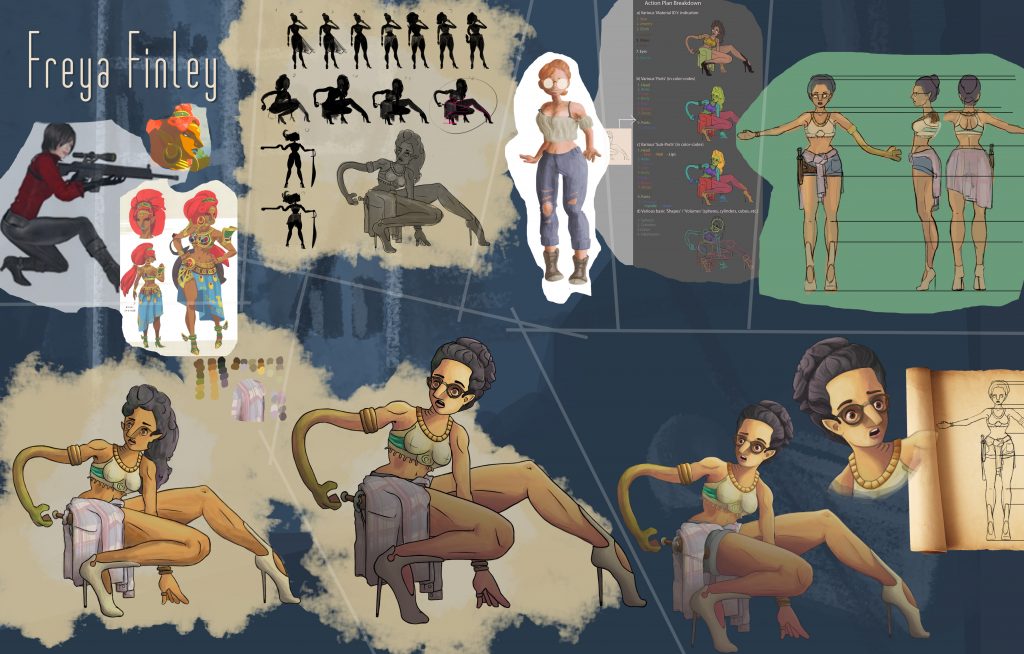 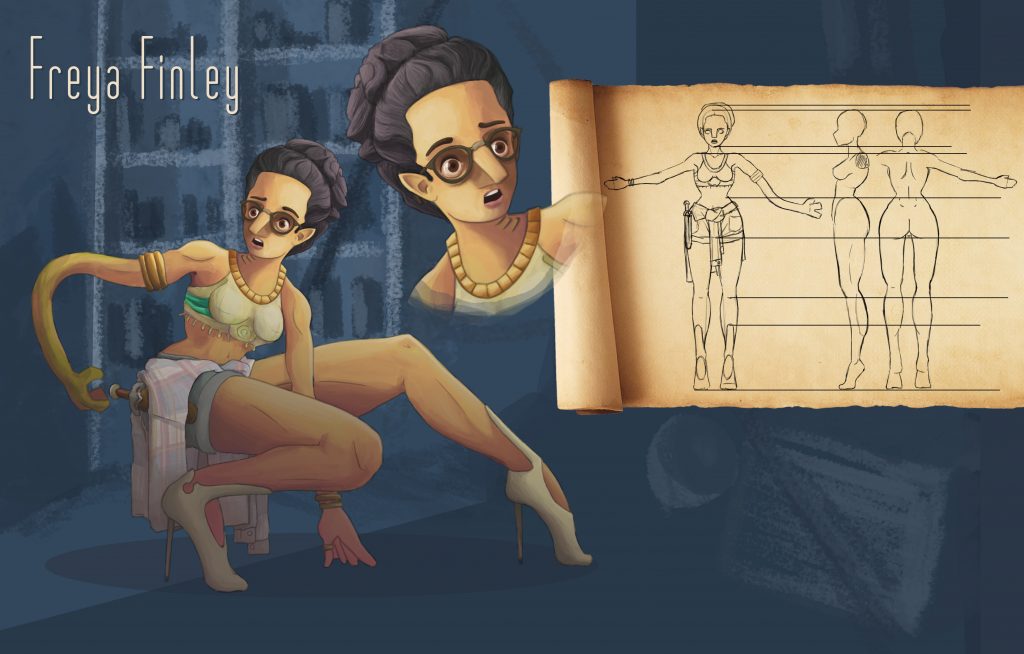 Some monsters are further developed than others but all are killers.
In her house she keeps a collection of worlds. One of these worlds is earth, which is clearly her favorite. By
the press of a button she can spawn into this world where she takes on a form which slightly differs each
time she comes there. She is not very used to the customs in this world so murder could be very normal to
her. But of course this is earth. The “normal” is very civilized. This is where she eats food and takes care of
herself instead of doing it in her own world. To take care of her planets she goes into her wasteland of a
planet to gather purple juice or how we would call it blood. It’s sticky and gooey but she needs it for her
planets. So how does she kill these big cruel creatures? Well she actually is kind of a badass. With swords
and arrows she gets herself around.

Only character wouldn’t make much of a game so to make it a little more fun we added a level with stage hazards. Some hazards are always on but others have to be activated. This makes up the core game-play; push each another player to knock em out and then activate a hazard to eliminate them from that round. If you win 2 out of 3 rounds you will be placed as the winner and put back in de main menu!